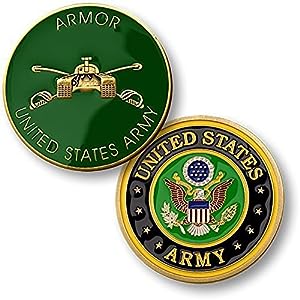 $14.99
As of 2021-05-05 13:10:22 UTC (more info)
Not Available - stock arriving soon
Buy Now from Amazon
Product prices and availability are accurate as of 2021-05-05 13:10:22 UTC and are subject to change. Any price and availability information displayed on http://www.amazon.com/ at the time of purchase will apply to the purchase of this product.
Product Information (more info)

With so many available today, it is good to have a brand you can trust. The U.S. Army Armor Challenge Coin is certainly that and will be a perfect buy.

For this price, the U.S. Army Armor Challenge Coin is highly recommended and is always a popular choice with many people. Armed Forces Depot have provided some nice touches and this equals great value for money.

The mainstay of the Army's awesome speed, power, and precision, the Armor Branch is vital to the success of U.S. Military Operations throughout the world. Tracing its origins back to Army's Cavalry units, the Tank Service was formed in 1918 and Armor officially became a permanent branch in 1950. During World War I, the 1st Light Tank Battalion was formed under the command of the legendary General George S. Patton, providing armored support for American forces throughout the St. Mihel Offensive and other critical campaigns. During World War II, the Army's Armored Divisions played a key role in halting the German advance and liberating Europe from Nazi aggression. Serving in every major American military operation over the past eighty years, the Army's Armored Branch has been instrumental to America's military power. This coin salutes the soldiers who proudly serve the U.S. Army's Armored Branch, whose courage and commitment have strengthened America's security. The obverse replicates the detail and design of Armor's Branch Plaque, which contains a pair of crossed sabers, depicted behind a tank. The reverse bears the official seal of the U.S. Army. Minted in a brass alloy and finished in bronze, this coin contains rich enamel highlights throughout. Each coin comes packaged with a detailed header card that describes the mission and history of the U.S. Army.

1 3/4 inch (44mm) Round MerlinGold Antique with Enamel Officially licensed by the U.S. Army Picture shows both sides of one coin