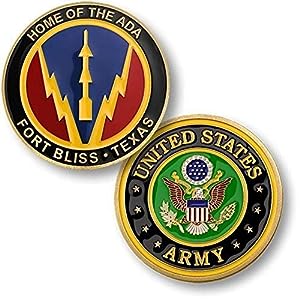 $14.99
As of 2020-07-05 00:19:48 UTC (more info)
Not Available - stock arriving soon
Buy Now from Amazon
Product prices and availability are accurate as of 2020-07-05 00:19:48 UTC and are subject to change. Any price and availability information displayed on http://www.amazon.com/ at the time of purchase will apply to the purchase of this product.
Product Information (more info)

We are proud to stock the excellent U.S. Army Fort Bliss Texas - Home Of The ADA Challenge Coin.

With so many available these days, it is great to have a make you can trust. The U.S. Army Fort Bliss Texas - Home Of The ADA Challenge Coin is certainly that and will be a superb buy.

For this price, the U.S. Army Fort Bliss Texas - Home Of The ADA Challenge Coin comes highly respected and is always a regular choice with lots of people. Armed Forces Depot have included some nice touches and this equals good value.

The main post for the Army's Fort Bliss is located in El Paso, TX while the majority of its sizable 1,700 square miles of training lands lie in New Mexico. After the September 11, 2001 attacks, Fort Bliss provided ADA Battalions for US and NATO use in Afghanistan and Iraq, and has served as one of the major deployment centers for troops bound for Iraq and Afghanistan. Fort Bliss is the second largest Army post, and the only US Army training facility in the continental United States capable of firing long-range missiles such as Patriot, HAWK, and Theater High Altitude Air Defense (THAAD) System. The post can accommodate every weapon system in the US Army. Minted in a hard-wearing alloy, the obverse of the US Army Fort Bliss challenge coin is enameled in brilliant attack colors. The reverse is a bold design based on the Great Seal of the United States with "United States Army" proudly circling the image. Display it with pride.

1 3/4 inch (44mm) Round Brass Antique with Enamel Picture shows both sides of one coin Officially Licensed by the U.S. Army