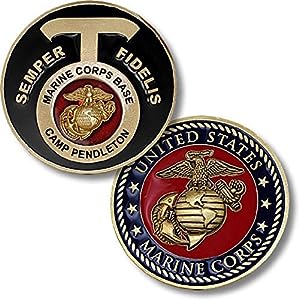 $14.99
Not Available - stock arriving soon
Buy Now from Amazon
Product prices and availability are accurate as of and are subject to change. Any price and availability information displayed on at the time of purchase will apply to the purchase of this product.
Product Information (more info)

With so many available these days, it is great to have a make you can trust. The U.S. Marine Corps Base Camp Pendleton, CA Challenge Coin is certainly that and will be a great buy.

For this reduced price, the U.S. Marine Corps Base Camp Pendleton, CA Challenge Coin comes widely respected and is always a popular choice amongst many people. Armed Forces Depot have included some excellent touches and this results in good value for money.

Marines who have been (or are) stationed at Camp Pendleton will be proud to carry and display this coin because of the rich and proud history it represents. In addition to the 1st Marine Division, the oldest and largest active duty division in the Marine Corps, Camp Pendleton hosts year round training for all branches of the U.S. military including advanced sea to shore training along the base's 17 miles of coastline. The base was named after Major General Joseph Pendleton, affectionately known as "Uncle Joe" to his troops, who was the driving force behind a Marine Corps base in the San Diego area. General Pendleton advocated for the West Coast base from the first day he stepped into the beautiful Southern California sun and was so taken with the area that he retired there, even becoming mayor of a local town. This coin, minted in solid bronze and imbued with rich enamel colors on both sides, is given an antique finish. The obverse of the coin bears the insignia of Camp Pendleton, a circle and 'T' design based on the cattle brand of historic nearby ranch. The reverse bears the proud seal of the United States Marine Corps.

1 3/4 inch (44mm) Round Bronze Antique with Enamel Officially licensed by the U.S. Marine Corps Picture shows both sides of one coin